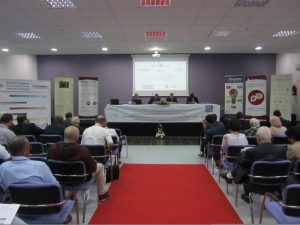 IEC National Committee of Morocco (COMELEC), held a successful forum to enhance stakeholder awareness of IEC Conformity Assessment Systems in Casablanca, in May.

Participants at the COMELEC Forum

The Q and A session dealt with aspects of IEC CA Systems, including membership, product categories covered by testing laboratories, how national differences are considered, and laboratory participation in the system even if the country is not yet a member.

Conclusions and next steps

In his closing remarks, COMELEC President Azelarab El Harti noted that IEC CA Systems are useful for international competition and consumer protection. He stressed the importance of collaboration between stakeholders, and building on capacities and competencies, in order to make the adoption of these Systems possible in Morocco.

It is hoped the Forum will become an annual event with the support of IEC. Additionally, an e-learning course will become available to Morocco experts and the certification department staff at IMANOR. This course will be offered by the Affiliate Conformity Assessment Status (ACAS) which provides Affiliate Members with resources, trainings and other benefits on all IEC CA Systems.

Morocco leads the RE charge in Africa

Without any of its own fossil fuels, Morocco has stepped up the development of alternative energy sources. Its goal is to produce more than 40% of its renewable energy (RE) by 2020, of which one third from solar.

Morocco’s participation in IEC standardization work for solar voltaic and solar thermal energy systems is particularly important as the country develops its RE power sources, to ensure the quality, reliability and sustainability of these systems.

It became an IEC Associate Member in 2010. Since then, it has been very active, as Participating or P-Member of four technical committees, including IEC TC 82, covering solar voltaic energy systems, and IEC TC 117 for solar thermal electric plants. COMELEC will host this year’s IEC TC 117 plenary meeting in Rabat, from 24-26 October.

In addition to a range of RE projects underway in urban transport and agriculture, in February 2016, Morocco began the first phase of a concentrated solar power plant expected to be the world’s largest when completed in 2018, which was connected to its power grid. The first part, located near the Saharan desert in Ouarzazate, provides 160 megawatts (MW) of the ultimate 580 MW capacity. This would serve 1,1 million people and greatly reduce annual carbon emissions.